Showing posts from October, 2008
Show all

The History of Halloween in Canada. 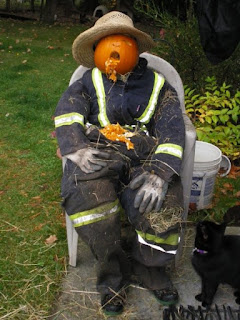 As with most history, there are a lot of theories about how and why Halloween was started. Most people tend to agree with a few facts on th e history of Halloween It was a celtic tradition It most likely came and was introduced here by the Irish. It was turnips, not pumpkins that were carved intially. Some believe it was a worship or celebration of the god of the underworld. Some believe it's the celebration of the celtic new year. The end of the old year fell on what is October 30, and the new year started on November 1. October 31, then, was thought to be a day "in limbo" when the laws of nature and physics were suspended, thus the dead could walk the Earth. On this "limbo" day, people were encouraged to act in a chaotic way, and thus young ruffians wandered the streets causing mischief, or begging for food door to door . Maybe that explains something!! It's also interesting to note that Catholic church celebrates the Feast of All Saints over a three d
Post a Comment
Read more

October 25, 2008
Halloween is quickly approaching here on Vancouver Island. Bonfires and trick or treaters will soon fill our streets. If possible try to make your Halloween fun WITHOUT the use of fireworks, I'm really quite sick of my dog having a coronary over them. Aside from the fact they are dangerous and illegal in lots of cities on Vancouver Island. Perhaps just find something more productive to do on and around Halloween. Here are some cities detailed Halloween events happening in your town! Nanaimo Unfortunately the infamous Halloween House will not be running this year. Instead you can check out "Asylum" at Beban put on by Island Haunt Productions. The horror begins on The terror begins on Friday, October 24th through October, 31st. Hours of operation are from 7:00pm to 11:00pm. The price for admission is $8 (eight) dollars. More information can be found at www.islandhaunt.com. Victoria Apparently it's been said that Victoria is British Columbia's most haunted
Post a Comment
Read more

King Of The Cage in Nanaimo!

October 17, 2008
So Saturday Oct. 18 is the King of The Cage match in Nanaimo at the Frank Crane Arena at Bowen Park. This type of fighting mixes martial arts and has been made popular with the UFC fighting. OFFICIAL EVENT LINEUP MAIN EVENT 170lbs – Jason Heit (Island MMA, Victoria, BC) VS Elmer Waterhen (Champions Fight Club, Saskatoon, Sask.) Prices are $35 for general admission Premium CAGESIDE Seating Pricing ph. 250-619-9207 CAGESIDE VIP $200 Row 1 $125 Row 2 $75 ROW 3 SOLD OUT! This is brought to Nanaimo by The Vancouver Island Mixed Martial Arts Commission, check it out if you're a fan!
Post a Comment
Read more

http://www.ladysmithwaterfrontgallery.com/ Wednesday, October 8th, 2008 - Saturday, October 25th, 2008 Opening Night TBA 7 days/wk noon- 4:00pm The Ladysmith and District Arts Council proudly presents the 4th Annual Fall Multi Media Fine Arts Exhibition. This juried exhibit attracts artists and artisans from all over Vancouver Island. The exhibit will feature the finest selected works of painters, sculptors, photographers, potters, glassblowers and others. Prizes include $1,000.00 for first place and $500.00 for second place in both two and three dimensional categories. Ten honourariums of $50.00 each will also be awarded. Check it out in lovely Ladysmith!
Post a Comment
Read more

October 05, 2008
Chemainus Theatre Festival: The Miracle Worker Starts: September 10, 2008 Ends: October 25, 2008 The Miracle Worker By William Gibson and directed by Jeremy Tow One of the 20th century's most inspiring stories - The Miracle Worker is based on the true story of Helen Keller. Unable to see or hear, Helen lives in a world of silence and frustration. But through the determination of her inventive teacher, Annie Sullivan, Helen discovers the power to communicate. This play opened on Broadway in 1959 and was an unmitigated success in its original two year run starring Anne Bancroft as Annie and Patty Duke as Helen. Both actresses retained their roles in the 1962 Oscar winning feature film. Please call the theatre Box Office directly for all show details and to book tickets. Location: 9737 Chemainus Road (70kms north of Victoria)
Post a Comment
Read more
More posts