Vancouver Island and The 2010 Olympics.

So, the Olympics (Winter) are coming to Vancouver. Here are some interesting stats on previous Olympics. This was found HERE.

Olympics have been known to greatly increase tourism, and this won't be any different with a city that already has great interest world wide.

Calgary 1988
Sydney 2000
Salt Lake City 2002
Vancouver-Whistler 2010
Other numbers
Vancouver Island is just a short ferry ride away from Vancouver, more laid-back, more in-tune with nature and more enticing for older folks who are looking to retire without having to pay 1 million for a condo. The Swedish nordic ski team has expressed interest in using the Mount Washington site for training. Booths will be set up at the Olympics highlighting and educating the public on the beauty that is Vancouver Island.

Vancouver Island will benefit greatly from this opportunity and hopefully people find out how great our little island really is. 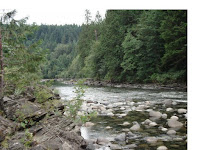