Showing posts from May, 2009
Show all

May 29, 2009
Here are a few things happening if you're looking for something to do this weekend on Vancouver Island! The Cowichan Theatre is hosting a dance performance by the Celtic Rhythms.(happening May 29th) On Saturday and Sunday you can head down to Victoria and check out the 2nd Annual Vancouver Island Custom Motorcycle and Car Show Starting Friday May.29th the Parksville Quilt Festival begins and continues until June 4th. It's supposed to be great weather for the next little while, so getting outside and enjoying the Vancouver Island life is a great idea too! live the good life!
Post a Comment
Read more

Many people don't know about it, but in 2002 a suspension bridge was installed across Haslam Creek. This development is included in efforts to establish the Trans Canada Trail . Next will be to establish a crossing point over Nanaimo River. There are 3 ways to access the Haslam Creek Suspension Bridge. 1. Across from the airport, in Cassidy. This is located at the end of Timberlands road, making a left at Rondalyn Resort. There is no signage at the entrance anymore due to VIU's Hea vy Duty Equipment Operator Program running in the gravel pit that runs along side the trail. If you park in between a private logging road and the gate you should find a trail at this point. 2. Up Spruston Road, drive past Mountainaire Resort, it starts just past Loftus Road. I have yet to access the trail this way, but will be checking it out in the near future. 3. Nanaimo River Road Access: Once you pass the turnoff for White Rapids Road, travel another 3.6 km up Nanaimo River Road to some ga
1 comment
Read more

May 18, 2009
It's that time of year again, the weather is warm and it's time to go to the farmer's markets!! Check out what's happening in any town on South Vancouver Island! Salt Spring Island Saturday Market Ganges, Salt Spring Island April 4 to October 31 Saturdays 8:00 a.m. to 4:00 p.m. At Centennial Park in Ganges Telephone: 250-537-4448 Email: parc(at)saltspring.com www.saltspringmarket.com Peninsula Country Market Brentwood Bay June 6 to September 26 Saturdays 9:00 a.m. to 1:00 p.m. At the Saanich Fairground (1528 Stelly's Crossroad), across from Stelly's Secondary School, near Brentwood Bay Telephone: 250-
2 comments
Read more

May 10, 2009
As many of you may know, we are in the midst of a provincial election. As a strong advocate of having and utilizing your voice - I strongly suggest you take the time and cast your ballot. In my opinion no vote is a wasted one, it takes minimal time to have your say in who will run YOUR province. Do your research, be informed - your future depends on it. Here are some helpful links, check them out and cast your vote on May 12th! Elections BC Be aware that you will also be voting for a referendum involving the way in which we vote. Check out both these websites and get informed! No STV British Columbians For STV And last but not least the Registered Political Parties! Here are some videos and information that may be helpful as well. I also strongly suggest you do your own investigating and research to help you decide where to place your vote. Pro Liberal Video Pro NDP Video Other Links. The Tyee 10,000 Voices For BC Rivers BC STV Debate
Post a Comment
Read more

May 03, 2009
Here's a little history lesson on Vancouver Island, enjoy! It is assumed that Vancouver Island was created as a result of volcanic activity over a period of 200 million years, starting about 360 million years ago. It was most likely near present day Mexico, slowly migrating up towards California. For quite some time, both Britain and Spain occupied the region. New Westminister was declared the province's capital before Victoria. The "Malahat" was a completed gravel road in 1911. The first automobile made it over in June of 1911 Archaeologists have determined that people have lived on Vancouver Island for about 9,000 years. Canada's oldest Chinatown is located in Victoria, B.C. Vancouver Island's first permanent resident was Dr.John Mackay. Native's occupied this island far earlier than any Europeons. The 49th parellel, which seperates Canada from the US, runs right through Ladysmith. Richard Blanshard becomes the first governor of Vancouver Island, but re
2 comments
Read more 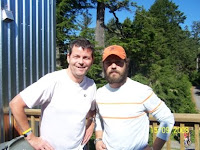 Hello readers. I recently have been receiving a lot of e-mails and feedback about the site and would like to thank everyone that takes the time to comment. Most recently I received an e-mail from a fellow from the Netherlands who LOVED what he experienced here, I'm going to post some of the e-mail. "visited the island in September 2008 together with my girlfriend and my best friend. We fell in love with it (especially myself!) because of it's beauty. An astonishing nature, laid back people and the nice cities were the reasons. We visited Victoria, Sooke, Port Alberni and Ucluelet. In Ukee, we stayed at the Terrace beach Resort . Because Jason was there for a fishing trip with his wife and some friends I had the opportunity to meet him briefly and taken picures of me and him." As the weather warms up on Vancouver Island so does the allure of outdoor fun in places like Tofino Port Alberni, Campbell River and everywhere else on beautiful Vancouver Island .
Post a Comment
Read more
More posts