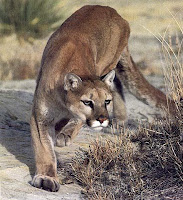 Although cougar attacks are highly unlikely (there have been approximately 5 death's in BC in the past 120 years! Bees kill more people each year) We figured we would educate the public on some pertinant cougar safety. The vast majority of attacks have been on children younger than 16, most likely because of their small size, erratic movements and high-pitched voices.

- Adult male cougars weigh 140-200lbs, females approx. 90-100lbs.
- They are most active dusk til dawn.
- During late spring/summer 1-2 year old cougars become independent of their mother
- Cougars are solitary animals, if you come across tracks with more than one print it is most likely a female traveling with kittens.

Here's what you should do if you unexpectedly meet up with a cougar:

- Cougar's generally are elusive and avoid confrontation, so if you see one NEVER approach it.
- Stay calm and confident.
- Do not RUN, this may trigger an instinctive attack.
- Try to appear assertive and larger than the cougar.

In the rare occasion a cougar does act aggressive, act aggressive back, intimidate the cougar with sticks, rocks etc. Fight back!

But just remember, we share our island with cougars and many other wildlife so it is important to show respect and not feed or encourage contact with wild animals!