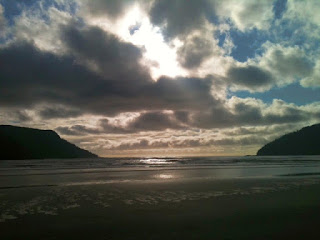 Well we finally arrived at the most northern point on Vancouver Island. We were so incredibly excited! The drive to Cape Scott is scenic (aside, from the vicious clear cuts here and there) and the signage is very easy to follow. We missed the infamous shoe tree, but a local said it pretty much looks like a garbage dump now anyways.

Cape Scott was named in 1786 by David Scott during a trading voyage to the area. The area is characterized by 64 kilometers of unreal ocean views and natural beauty. There are about 24 kilometer's of beach alone in this area! Nels Bight is considered to be the most beautiful of all the surrounding beaches, this beach is about 6 hours (almost 17 kilometer's) from the Cape Scott trail head, so unfortunately we were unable to access this beach on this trip but plan to make another trip (and hike) in early summer of 2012. We will probably do it over a long weekend so we can camp on the beach over night in a few spots, anyone who has ever hiked Cape Scott - we would love your input! This was our first time out this way and we were in awe at the beautiful rain forest and the beach was unbelievable - if you live on Vancouver Island and you haven't experience the Cape Scott area, I strongly suggest you do.

Shari Wright said…
First of all, the drive up to the trail head is the perfect way to start the journey! Yes, there are some clear cuts, but we do have to remember that if it wasn't for some active logging, the roads would not be in the good shape they are in now. We just did this hike in July! Amazing experience! the trail is in great shape...considering the muddy bits, roots and rocks. It took us roughly 6 hrs (including stops for lunch and moments to take in all the beauty that surrounded us! We stayed on Nels Bight where there are food caches, pit toilets and fresh water( fresh yes, needs to be treated though). The next day we hiked the 7km trek(one way) over to the lighthouse. A must when in the area. In total we spent 2 nights on Nels. We didn't realize there were forested camp sites at Nels until we had already made camp. It was a rainy couple of days and the forest would have been cleaner (wet sand is very clingy!)Seen a couple bears, lots of wolf activity and signs of big cats..kept our dog's nose busy! Next time we do the hike, we will hike to Eric Lake, spend the night on one of their lovely tent platforms complete with food caches and pit toilets. Then hike up to Nels the next day to break it up a bit. Awesome hike...breathtaking beaches...memories for a lifetime! If you want to spend a night closer to the trail head, there is the San Josef, Forestry Rec site..free!
Have fun..and happy hunting if your a geocacher!
October 10, 2011 at 5:38 PM

s. said…
Thanks for all the great tips! We were planning on camping at Nels Bight for sure, but perhaps we'll stay a night on Eric Lake...Did you go in early July or late July? What are the nights like? (mild? wet?)
October 11, 2011 at 8:08 AM

Between Piper's Lagoon and Neck Point Park in Nanaimo   Since prawning is open year round (in most areas always check the BC Sport Fishing Guide to learn of possible closures in your area) my dad and I decided to brave the unpredictable winter weather and head out just off of Neck Point Park to drop some prawn traps.   There are actually 6 species of shrimp/prawns that thrive off the British Columbia coast, but we were after the largest of the species; the local spot prawn. Large females can exceed 23 cm in total length! You can tell a spot prawn by 3 distinct white horizontal bars on their head area and two white spots on their first and fifth abdominal segment. Prawns are male in their second and third year, then becomes female in the third or fourth year, eggs can be found on the underside of their abdomen Oct - March. For conservation purposes it is suggested that these egg bearing prawns be returned to the ocean.   the local spot prawn with it's distinct
Read more

The Harewood Plains in Nanaimo B.C is home to second growth forest and open meadows and highlights an amazing view of south Nanaimo. It is bordered by Harewood Mines Road, 10th St and McKeown in Chase River. It can be accessed via Harewood Mines road just past Rimrock Trail, or at the end of McKeown Way the first right off of Chase River road past the elementary school. MAP The Harewood Plains area is privately owned by stakeholders Island Timberlands and the BC Transmission Corporation (they maintain the transmission lines throughout this area). The area contains some rare plants, 10 rare plant species that are considered endangered or threatened. One extremely rare plant called the meadow bird's foot trefoil (Lotus pinnatus), is only found on the Harewood Plains and in a small area in Duncan. This area is unprotected and at risk for being destroyed by motorized vehicles and people walking off-trail. It is important to respect the land and stay on designated trails. W
Read more