We were going to attend the Occupy Victoria rally, but decided we would save some time (and gas money!) and attend a local rally. Throughout this whole lead up to the Occupy protests I have heard a lot of negativity, "It's silly to think you guys are going to change anything" "It's dumb and a waste of time" "What is the point?". I am reminded of this lovely quote.

Great spirits have always found violent opposition from mediocrities. The latter cannot understand it when a man does not thoughtlessly submit to hereditary prejudices, but honestly and courageously uses his intelligence and fulfills the duty to express the results of his thought in clear form.
Albert Einstein, quoted in New York Times, March 19, 1940
US (German-born) physicist (1879 - 1955)

The movement is so broad, there isn't one reason for it - there are many reasons, distrust in the world powers, anger about the unnecessary and completely preventable economic collapse, and just general animosity towards the abuse of power in society today. It was very humbling to be around people that aren't apathetic and show some passion towards the world and want to see things change. 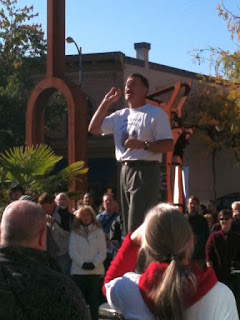 There were lots of speakers, some from the various local political offices, some just passionate human beings that had something important to say. The highlight for me was Mr. Dirk Becker's inspiring words regarding the initiative to re-localize. In other words, shop local (this does not mean Wal-Mart or any of the other assorted big box stores that often do more harm than good in our communities), support local businesses, bank with a local credit union, KEEP IT IN YOUR COMMUNITY!

I believe the rally was a success, it was a family friendly event, very peaceful and very informative! Hopefully this is just the tip of the iceberg of change that needs to happen in the world today. Thanks to all that came out to support the movement. 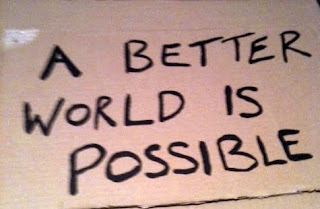 Brian Charlton said…
The Comox Valley had a good Solidarity With Occupy Wall St. rally. About 200-250 people. Lots of new faces. Variety of issues but everyone seemed to agree that the present economic system needs to be changed and people's needs, replace corporate greed, as the guiding principle of our elected reps.
How did other Occupy rallies on the Island go?
October 15, 2011 at 6:19 PM

JIM TAYLOR (Not the famous one!) said…
Don't shop at WalMart, support local business, re-localize? All good sounding buzz words, but can you direct me to the local store where I can buy locally made shoes and clothes for my child?
If you are a Wal Mart employee are you any worse off than if you are working for a locally owned business?
Like I say, good sounding buzzwords, but not terribly practical in the application. ALL our stuff comes from China, and WalMart delivers it, and locally we simply can't compete unless it is specialty items.
Sooo direct me to the local manufacturer of shirts ... I need a new one.
October 17, 2011 at 8:05 AM

s. said…
Even just supporting a local business owner is a huge step up from supporting Wal-Mart. Wal-marts systematically destroy locally owned businesses in any city it sets up shop. Why not try this place

JIM TAYLOR (Not the famous one!) said…
I support local business whenever I can, in fact I used to always be willing to pay more for something made in Canada,and that goes back 30 years.
Now, try and find something NOT made in China? I am sure I will not find what saltsorganic sells at WalMart, nor will I find a pair of jeans at saltsorganic.
If Wal Mart is the only place I can find what I am looking for, telling me not to shop there, is kind of silly IMHO.
Support local business by all means, pay a premium (if you are fortunate enough to have extra money), but if local businesses can't meet my needs ....... what's your point??
October 17, 2011 at 12:16 PM

s. said…
Local businesses can meet needs, and the power of the internet where you can buy pretty much everything and anything on-line (including socially conscious clothing etc). Buying local does so much more than just support the business, it supports the economy, the community and the world. Perhaps you have to look at the bigger picture, Wal-mart pays a lot for advertising so it does seem like the only place that has everything!
October 17, 2011 at 12:53 PM

JIM TAYLOR (Not the famous one!) said…
It has nothing to do with advertising appearances. Making purchases online is supporting local business how???
You say buy local, but fail to tell me where to buy a pair of Levis or a new pair of sneakers that support local business??
Not being a very bright fellow, I leave the 'big picture' stuff to the intellectuals in our midst.
October 17, 2011 at 1:24 PM

s. said…
Jim, there are many many options out there. Sometimes it just takes a bit of a search, because most local businesses do NOT pay for big advertising. You can also make your own clothes, if you really want to be extreme about it - people really used to do that! Some sewing supplies and some fabric and VOILA - a new shirt :)
October 17, 2011 at 1:28 PM

Anonymous said…
Salt organic has some amazing looking products but $48 dollars plus shipping for a basic mens t-shirt is WAY beyond my budget.

I would love to support local business but unfortunately with cost of living I cannot afford prices like that.

I expect to pay more for better quality and I understand that production costs are higher here than in china but I simply cannot pay the prices that local manufacturers are charging.
October 17, 2011 at 1:37 PM

JIM TAYLOR (Not the famous one!) said…
Some sewing supplies and some fabric and VOILA I've got a potato sack if I'm lucky........
So, can you direct me to ONE of these local businesses where I could buy a pair of shoes, pair of jeans, a shirt, a jacket, and a pair of mittens that is really going to support a local business person???
When I buy that pair of jeans from the big bad Wally's World store and SOME of those funds flow to some poor soul in China who would likely starve otherwise.....how is that not a good thing?? BTW some of those funds also do pay LOCAL people who work there, so that does support the local economy.....
That big bad mall where Wally's World operates from is now the single biggest taxpayer in Nanaimo now.
October 17, 2011 at 2:28 PM

s. said…
Jim, everything in life is a choice - you can choose to FIND places that are local and environmentally friendly, and pay their employees fair wages. You can also continue to buy things at Wal-Mart and make the Walton's more rich than they have ever been. I'm not telling you that corporations are all bad and the world is going to end if you keep shopping at Wal-Mart. I'm just suggesting there are LOTS of other options out there that are better for the world, environment and the community.
October 17, 2011 at 2:35 PM

http://www.vancouver.com/shopping/specialty/local_designers/ - Vancouver based, but stay far more local than China.

http://artzistuff.jimdo.com/ - this place is right on Wesley St.

Wilde and Sparrow in Parksville http://www.wildeandsparrow.com/

You are more than welcome to simply use google and type in Local Clothing on Vancouver Island or what have you and search yourself.
October 17, 2011 at 3:01 PM

JIM TAYLOR (Not the famous one!) said…
Thanks for the links, but are ANY of these alternatives practical if you are trying to cloth a couple of school age kids on a typical family budget in Nanaimo???
October 17, 2011 at 3:46 PM