December 19, 2011
December 17th marks my awesome 9 year old nephew's birthday. Last year we took him to the North Island Wildlife Recovery Association Park , which is a place that is dear to my heart (he loves it too!). This year he wanted to adopt or sponsor one of the wildlife, so we adopted Piglet, a young bear cub. Kye will receive a colour photograph of the bear cub, one individual free pass, and a brief history of Piglet.


Along with the adoption, we decided to take a day trip down to Victoria to check out the new outdoor ice rink in Centennial Square (right next to McPherson theatre) 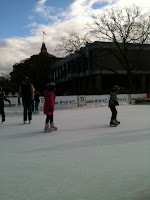 Although the ice area isn't all that big (they state no more than 60 people at a time, you'd literally be sardines) we had a great time! Entrance fee is $2 and if you need to rent skates it's $5. It's open Monday - Saturday 12pm - 8pm and Sunday 11am - 5pm. It's worth checking out!

For lunch Kye wanted sushi, so we went to Azuma Sushi on Yates St, they had expanded since I had last been and it looked great in there! We ordered Oysters Ponzu, spring rolls and a bowl of clam miso soup (which was dynamite, I had two spoonfuls and Kye finished the rest). We also ordered an assortment of sushi rolls, the Prawn Tempura roll being a favourite. After lunch we decided to visit the Royal BC Museum. They had the Wildlife Photographer of the Year exhibit on, it was pretty amazing to see some photographs from children between 10-14 that were absolutely stunning!

Next we checked out the Natural History portion of the museum (my personal favourite). Kye was a bit put off by the huge life size mammoth, he kept asking "That's not real is it?". He even refused to pose in front of it for a picture, he didn't want to turn his back to it! Hahaha. 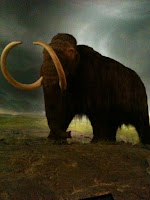 We learned lots of things about climate change and nature, Kye stopped and posed with a grizzly bear. No big deal. 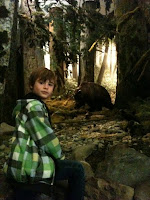 We spent over 2 hours in the museum and had an absolute blast.
The museum was founded in 1886; the archives in 1894. In 2003 these two organizations integrated to become British Columbia's combined provincial museum and archives, collecting artifacts, documents and specimens of BC's natural and human history, safeguarding them for the future, and sharing them with the world. What a treat it was to see and learn about the history of Vancouver Island.

We had a fabulous day and will be back very soon, thank you Victoria - you're beautiful :)
Victoria