Diners Rendezvous holds a weekly jam on Tuesdays usually hosted by talented VIU students, but once a month features a Master Jam by the seasoned band THE MARTYS. This month THE MARTYS will open with a set dedicated to Duke Ellington, then open the stage for singers and players to jam.

THE MARTYS are Marty Steele on keys, Marty Howe on flute and jazz chromatic harmonica, with James (Smarty) McRae on drums. THE MARTYS play red hot, blue cool, funky, swinging jazz, in a way that will WoW you, move you, tease you, and please you. 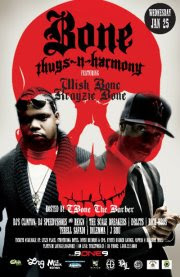 BONE THUGS ~N~ HARMONY feat KRAYZIE BONE & WISH BONE - Live in Victoria, January 25th CLUB 9ONE9 & Marshall A for DMS Present…………Bone Thugs N Harmony have sold more than 15 million records. They recorded with The Notorious B.I.G. They recorded with 2Pac. They won a Grammy. They redirected hip-hop’s sonic direction. Only one rap group has these impressive feats on its extensive resume: Bone Thugs-N-Harmony. Simply put, the Cleveland quartet is one of the most important groups in hip-hop history; breaking down doors for other Midwestern rappers; launching their successful Mo Thugs record company and introducing mind-splitting, rapid-fire rapping and angelic harmonies with melodic production to the genre. 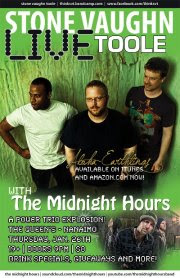 Stone Vaughn Toole w. The Midnight Hours - LIVE at The Queens in Nanaimo (January 25th http://www.blogger.com/img/blank.gif9:30pm - 1:30am), Stone Vaughn Toole redefines the term power trio with a sound that is both simple, yet larger than life. Back for the first time since they wrapped up the Aloha Earthlings dates in 2010, SVT are planning a wide ranging set to highlight the diversity of their sound. They are now in pre production working on their second effort due out later this year, what better place and opportunity to sample some of their new material?!!

Building on the strength of radio favorites Telephone Wire and Bleed, the new SVT album is expected in late fall 2012! 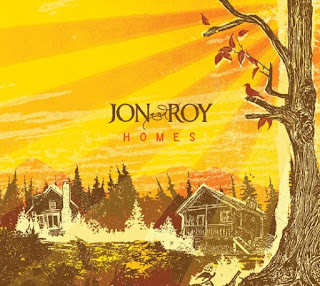 Jon and Roy on Saltspring! w/Barefoot Thieves and Billie Woods - Playing the Beaver Point Hall on Saltspring January 28th 8pm - 11pm. $20 at the door, we will be attending this event! Music Genre = Roots/Folk/Reggae, all members from Vancouver Island!
You can view their video here "Little Bit Of Love". Check out their website
Nanaimo Victoria