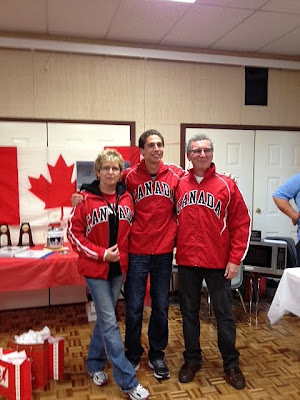 On a rainy Friday night in Black Creek, the members of this small community, located between Courtenay and Campbell River, came together to show their support for local runner Cameron (Cam) Levins. Most of us “know” Cam by virtue of his running regime that brings him into our neighbourhoods and our hearts. Cam has earned a place on Canada’s Olympic team for 2012.

Cam is a student at Southern Utah University (SUU), where he is on a track and field scholarship. According to Cam’s high school track coach, all it took was one visit to SUU for Cam to know it was the right place for him. Although other more recognizable or prestigious universities were in the running, it was his rapport with the coach that made SUU Cam’s first choice.

Many sports writers are calling Cam’s accomplishments amazing and unheard of in racing. Earlier this spring Cam competed in and won the 5,000m at Mt. San Antonio College and the 10,000m at the Peyton Jordan Cardinal Invitational at Stanford University. Cam is the first runner from SUU to run a mile in under 4 minutes. He also competes in several categories, including a mix of the 1,500m, 5,000m and 10,000m that are generally considered incompatible. Just don’t tell Cam that. Cam definitely sets his own pace and standards for training too, running about 240km a week. That is a lot of pavement. This year Cam won both the 5,000m and 10,000m races at the NCAA Outdoor Track & Field Championships in Iowa to become SUU's first national champion and just the 11th man to ever win both the 5,000m and 10,000m titles.

The word of the evening was “ownership” as all of us in attendance feel a kinship to Cam, having watched as he runs through our neighbourhood on one of his many training runs. Always focused on his running, he nevertheless has time for a wave and a quick “hello” as he streaks by. So it was that feeling that prevailed at the fundraiser held at the Black Creek Community Centre on June 22. People opened their hearts and their pocketbooks to raise money to help send Cam’s parents, Barb and Gus, and older brother, Jordan to London to cheer for Cam at the 2012 Olympic Games. Besides the refreshment tally, money was raised with a silent auction of items donated by the friends, neighbours, and co-workers of the Levins. A large donation jar was overflowing by the end of the evening.

Even the drizzly weather couldn’t have dampened the enthusiasm of the home town crowd, most dressed in red and white, as they waited patiently for Cam to arrive. Organized by the co-workers of Cam’s mom, Barb, we were treated to hamburgers, hot dogs, and soft drinks while we visited amongst ourselves sharing stories of sightings of Cam. After much anticipation and excitement the announcement came of the pending arrival of Cam and his family. The hall erupted with the sound of some 200 people singing Oh Canada. It was a very special moment.

Cam was inundated with greetings and congratulations and set about fulfilling requests for his autograph, something he had better get used to. I too took my turn standing in line to congratulate Cam and ask for his autograph. Cam is not only a very talented young man he is polite, considerate, and humble. It is a testament to Cam’s character that he spends most of the evening saying “thank you” and telling the crowd that he never passes up the opportunity to tell people he is from Black Creek.

Friends and neighbours from nearby Saratoga Beach upped the ante with a special gift for Cam and his family. They presented them with customized red Canada jackets emblazoned with TEAM LEVINS on the back. It was a very touching moment. There was a bit of humour too when the presenter told Cam they had jackets made for his “girlfriends” (plural) which brought about a surprised reaction.

Speeches followed from his former track and basketball coaches who quipped that at 5’10” Cam had made the right choice when he opted for track and field over basketball. During Cam’s most recent race, the athletic department of Vanier Secondary School in Courtenay was holding its annual banquet while simultaneously airing the race and Cam’s win on the big screen. A very exciting moment followed with Cam’s induction to the Sports Wall of Fame at his former high school. Cam recently received a sponsorship from Nike.

His drive and determination is evident in his success, and we all wish him well in the 2012 Summer Olympic Games in London where he will compete for Canada in the 5,000m and 10,000m races.