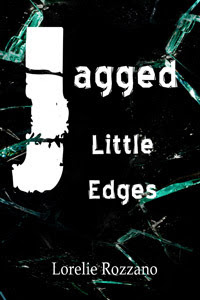 Jagged Little Edges is the perfect title for this book about the life altering grip of addiction the main character Lyndsey experiences by Lorelie Rozzano.

The story starts with Lyndsey's rough beginning dealing with emotionally absent parents, as well as an abusive alcoholic father. She learns very early on in her life that she really only has herself to depend on in what she experiences as a very tormented and dysfunctional life. While reeling you in early on with sympathy for the main character, this novel does a great job at creating an intense interest in the protagonist's journey (how terrible is it really going to get for this poor girl?).

You follow her slow decline into the pits of addiction, starting with cigarettes and alcohol as well as her abusive and unhealthy relationship at a young age with a man who remains nameless. Lyndsey's self worth declines further and further after she becomes pregnant and gives the baby up for adoption.

This seems to be the negative plateau for Lyndsey as her life begins to take a serious nosedive at this point. With no emotional support and loving relationships in her life she turns to what she knows will give her quick relief from her agonizing pain. At this point in the novel you are really aching to see Lyndsey turn her life around but at every corner it just seems to go more downhill. Eventually Lyndsey hits rock bottom and this is a very difficult and reluctant turning point for her, her transitional period of hope, then decline, hope and more decline leaves you wondering how on earth this jaded yet likeable woman will end up.


I won't give away the ending but I assure you Lyndsey does see the light eventually, I highly suggest giving this novel a read, it can be purchased on Amazon (and you'll be supporting a Vancouver Island author!) This book is based on Lorelie's own experiences with addiction, she received treatment at Edgewood Treatment Centre in Nanaimo and now works there dedicating herself to helping others see the light at the end of the tunnel.

I also had the chance to e-mail Lorelie a short interview so we could get to know the author a little bit. Thanks Lorelie for your book and your time responding to my interview!


1) Where are you from and where do you currently live?
I was born in Estevan Sask, but only lived there for 3 months. I was raised in Vancouver, Port Alberni and Powell River. I also lived in Victoria for 18 months. I have lived in Nanaimo for the last 22 years and it is here, I call home.
2) What was the drive or motivation to write a book about drug addiction?
I work in the field of addiction and I'm in recovery myself. I speak with so many people suffering from, or affected by addiction. The stigma and shame attached to this illness is brutal and so are the myths. One in ten suffer and left untreated it can be terminal, and most often is. This is a very treatable illness and it is my hope we start the conversation sooner, rather than later. Perhaps someone reading Jagged Little Edges will recognize they need help, or will relate in some way. After all. Lyndsey the main character, could be your sister, your friend, your wife. She could be you. Addiction doesn't live on skid row on East Hastings Street, very seldom does it end up there. It lives in your neighborhood, your schools, your police force, your government, your Doctors office, the pilot who`s flying your plane, and the driver you pass on the road.
3) What do you hope the readers gain from reading your book?
I hope my readers gain education and courage. After all, there`s no shame in getting well. But mostly, I wanted to leave them with hope. For once on the other side of this, WOW. Personally, I don`t think without this illness I ever would have worked as hard on myself as I did. Most will never really know the behaviours they've developed which keep them stuck and unhappy. And not everyone has the courage to ask for what they need or to be honest with thier feelings. I think Ernest Hemmingway says it best. ``We are stronger in our broken places.``
4) Where do you see yourself in 5 years?
Really, I haven`t got a clue, but ideally writing. I am just editing the second in the Jagged series, Jagged Little Lies, and perhaps by then the third in the Jagged series will have been written and published. I have a couple of kids books on the go as well. Please feel free to check out www.jaggedlittleedges.com for a free download of Gracie`s Secret, illustrated by a very special little 9 year old girl, Emma.
5) Which is your favorite restaurant on Vancouver Island and why?
What a tough question! I`m going to stick with Nanaimo and I can`t pick just one. Is three OK? Kelsey's for their chicken sonoma salad. Simon Holt for their warm spinach salad and Theresa's House of Burgers for their endless variety of burgers. Yum.

Anonymous said…
Addiction..... the conversation no one wants to have.

Thankyou Shalyn for reading and reviewing Jagged Little Edges. Addiction is a daunting topic, but once spoken, can save lives.

s. said…
Thank you for writing such a thought-provoking discussion starting novel!
July 3, 2013 at 10:18 AM